Home History Of Dances in the 40s and 50s

Jesuit’s first dance and the “first social of the season” was held on October 8, 1943.  Jesuit hosted the girls from Merici, St. Joseph’s Home for Girls, St. Edward’s and Our Lady of Good Counsel. The Nov. 1943 Roundup notes that Jimmy Scanlon and Jack Burney performed a magic show.  In addition, ” A jitterbug contest was held . . . [and the winners] obtained a prize of a season pass to our football games.  Before, between, and after the contests, shows and entertainments and refreshments were provided.”

Jesuit’s first junior/senior prom was held on May 19, 1944, at the Lakewood Country Club.  The seniors “decided that there would most assuredly be a prom, if Father Mulhern would consent,” and he did (The Roundup May 1944).

The February 1944 Roundup notes that one difficulty the girls had to overlook at a dance held on November 19, 1944, was “that some of the boys wouldn’t dance.  The students of Jesuit are slowly but surely getting over their bashfulness.”  The jitterbugging was enjoyed by all.

A victory dance after the October 13 game against Laneri cost 25 cents per couple, 50 cents stag.  “Music was furnished by that ever-loving jukebox, beatin’ out the boogie, and singing out the swing” [sic] (The Roundup November 1944).

“There were blue streamers and streaming gowns and stiff fronts and a good smooth orchestra that evening of the second annual Junior-Senior Prom . . . at the Dallas Country Club” (The Roundup May 1945).  Unfortunately, no date is included in the account.

By 1945 dances sometimes became fundraisers.  The November 1945 Roundup describes a dance whose proceeds “form the largest contribution to the fund responsible for the maintenance of the Senior Lounge.”  In October 1946 the class of Three A sponsored a Halloween party (The Roundup Spring 1947).

On Oct. 19, 1945 the“The esteemed sophomores of Jesuit High contrived and executed a successful and very illustrious dance in the Jesuit Auditorium. Doug Deffari again demonstrated, with the assistance of Betty Domino, the essence of Jitterbugging ability to the tune of a sizzling recording. Of the dance as a whole, nothing but good can be said and we might add that the sophomores are to be commended for their generous donation of part of the proceeds of the dance to the seniors to assist in the building of their lounge.” [The Roundup]

The first supper dance was sponsored at Jesuit by Class 3A in January 1947.  “The auditorium was given a night club-like appearance by indirect lighting, and a dual floorshow, consisting of a magician and two musicians” (The Roundup May 1947). 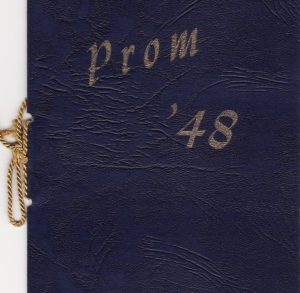 The Roundup December 1948 first notes a homecoming dance after the Laneri game on November 12.  The students from Laneri and three girls’ schools were invited.

During the 1940s, Class 3A sponsored the most dances.  Their November 24, 1948, dance included a contest to decide “who would be first to succeed in getting the milk out of his bottle.  The contestants were Mark Tolle, Dick Whetzle, graduate Dave Healy, and Coach Shorty Wall.  Although intended to be a contest of brawn rather than brain, Mr. Wall outsmarted the others by pulling the nipple off his bottle and finishing first” (The Roundup December 1948).

On November 1, 1952, the homecoming dance began with a Grand March when “all attention was focused on the queens, who stepped, as it were, from within a large football.”  The maids of honor crowned them with wreaths.  The dance ended about 1:00 a.m.  (The Roundup December 1952).

In February 1954 the Jesuit band held its annual dance.  The featured entertainers were the six Kool Katz (54 Mother’s Club Scrapbook)

The 1954 Prom was held at the Dallas Country Club with Buddy Mack’s band.  The 1956 Homecoming dance was held in the gym which had been turned into a “beautiful ‘Skyline Room’” by the queens and the football team.  The “Tones,” Jesuit’s dance band under the direction of Bill Schuster, provided the music.

In November of 1958, “As everyone struggled up to the gym Saturday night, they were pleased by the decorations which were hung in a colonial manner.  They consisted of yellow, blue, and white strips of paper clever-strung from time-worn rafters to improvised wooden stages. . . . After the [homecoming] coronation a special dance was shared by the queens and princesses and their escorts followed by another dance this time which included the football players and their date.  Finally, the third dance gave everyone a chance to dance.”