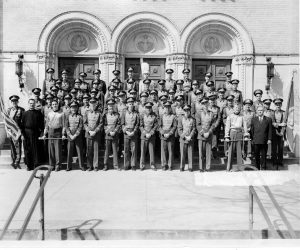 I was in the band for four years. If you’ve ever been in – or seen pictures of – the Oak Lawn building you know it had four floors. The Band Hall and Gym were on the fourth floor. So, to some limited extent, I can probably attribute my current good health to four years of climbing those stairs, at least five times weekly. The Hall was an under-sized room off of the gym, presided over by E. L. Hohman.

Mr. Hohman was an elderly individual – at least in the eyes of a 14 – 17 year old – who obviously was originally from Germany. At least his accent indicated such. One never asked. You were there to play. It never occurred to me at the time, but he was teaching music only a decade-plus after WWII. He never said anything about what brought him to the U.S. and, in particular, a boys’ Catholic High School in Dallas (Dallas, at that time, did not have nearly a muscular presence as it does today). Hohman’s accent was – I presumed – German. Fr. Revoire was the faculty representative (or some such title). And the two of them tried to run a tight ship. I don’t recall the origin or ownership of all of the instruments. I played the Baritone horn and I know that was provided by the School, as were the tubas, trombones and percussion instruments. Don’t know about the smaller instruments, clarinets and trumpets. I do remember the uniforms: very hot wool; not comfortable during early-season games.

The Band would – I am certain – not compare to the mighty ensembles forged in the mega-high schools of today. In fact, most of us never played any instrument before starting Jesuit. So it was a rag tag lot, but we had fun and enjoyed those daily climbs to the aerie that was the Band Hall.

In the old building there was a Senior Lounge, open of course – only to seniors. And you could smoke! Yes, the Jesuits openly condoned and abetted smoking. I used the Lounge, and I smoked. It was the cool thing to do then. Fortunately, albeit years later, I quit. But the slippery slope was greased and polished with Jesuit cassocks. The smoking area was directly across the hall from the cafeteria. As I recall I took my lunch. Regardless, since it was so convenient you just wolfed down lunch and then could go next door and puff away. This was all pre-Surgeon General report, of course, but I wasn’t the only student to be seduced by the twin allures of “our” (Senior) room plus the opportunity to smoke. There were, of course, long range consequences. I was able to kick the habit, but not until I was forty. My buddy, Bob Barker, never could quit; he died of lung cancer about four years ago. I pray that the smoking room has been abolished. 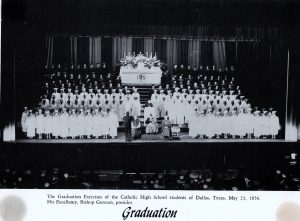 I lived close to the intersection of Preston Rd. and University Blvd. I regularly got to and from school hitchhiking on Preston. Sometimes I took the bus, but most days I stood on the curb, stuck out my thumb, and within minutes had a ride, usually from a business man going to downtown Dallas (it was not a heavy commute in those days). I never gave it a second thought and neither did my parents. Can you imagine a young teen hitchhiking along Preston today? Sigh, those were more innocent times.