Home History Of The Philothespic Society (Theater) in the 50s

Moderator Mr. John H. Edwards, S. J. broke with tradition and performed Richard III in the school auditorium. He explained to the newspaper staff that he wanted “the play [to be] more of a school affair, and it is much more convenient for all concerned. Next, the money ordinarily spent on rental will have some permanent effects in lighting, curtains, and the like.”

The principal’s diary notes in February 1950 that the cast of Richard III “was very well trained and the play was very well received. I do not think the play itself was as fascinating as Macbeth or King Lear and The Merchant, but it again reflected credit on the Philothespic Society and on the school. John Tolle who played Richard III and Burnell Brown who played Buckingham were especially good. Attendance 220.”

Tickets for the performance were sold by any “Phil member or in the basement during lunch period. Adult tickets sell for one dollar; student tickets for eighty cents” (R Feb. 1950).

The January 1950 Roundup describes major enhancements to the auditorium: “During the Christmas holidays Mr. Edwards began an extensive remodeling of the Jesuit auditorium . . . The stage is being lengthened several feet; wings are being taken from Ursuline’s old stage and added to our stage, new electrical outlets . . . a dimmer and . . . floodlights and spotlights are being purchased; new curtains and facilities for handling scenery are being installed; and seating capacity . . . will be increased considerably.”

Spring 1951 was snowy and icy and the schools declared “holidays” for two days. Nevertheless, about 300 people braved the icy roads to attend the performance of Julius Caesar (PD). The January 1951 Roundup states: “The play will be presented in Elizabethan dress for the first time, we believe, in Dallas. But with the quality of the cast this year, and also because of the timelessness of the play, Mr. Edwards did not think it necessary to dress in the Roman togas.”

“The officers of the Phil for the past year were as follows: Johnny Keehan, President; Larry Magner, Vice-President; Joe Pangle, Secretary; and Tommy Allen, Treasurer. . . . Under the direction of Larry Magner [the new members] are receiving a fine education in the fine points of Parliamentary procedure. . .” (LR 1951).

In the 1950 – 1951 Elocution Contest, Joe Pangle won first place in the senior division and Doug Weisbruch was first in the junior division. [see April 1953 notation below] John Tolle, editor of The Roundup, was the senior winner of the Philothespic Award. The banquet was held Sunday, May 6 at Sammy’s Terrace Room.

The 1951 – 1952 highlight of the Society was Bill Otto’s winning “the annual Voice of Democracy Contest. . . to place first in the city contest” (R 1952). In addition, A Midsummer Night’s Dream was presented in the round (R Dec. 1952).
Mr. Pat Koch, S. J. served as moderator. The Society again closed the year with a banquet at Sammy’s Terrace Room. 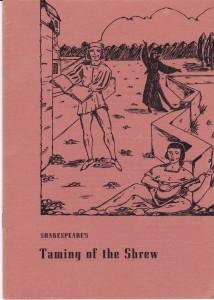 The December 1952 Roundup reported that “Although the Philothespic has escaped notice on the pages of the Roundup in recent issues one could easily observe some of its perpetual activities in the auditorium any afternoon these days.” For the production of A Midsummer Night’s Dream “many new faces will be smeared with grease and baked with hot lights.”

The April 1953 Roundup reports that some thirty boys tried out for the 11th annual elocution contest to be held April 16, 1953, of which ten will be selected. This edition of the paper also explains the senior and junior divisions. The senior division “consists of the most eloquent orators from the junior and senior classes.” The junior division “consists of the top five elocutionists from the freshmen and sophomore classes.”

“Master of ceremonies for the Junior division will be Jimmy Davis, last year’s winner in this division. While in the Senior division, last year’s first place winner, Doug Weisbruch, will be master of ceremonies.” Judges for the contest are speech teachers from Hillcrest, Woodrow Wilson, and South Oak Cliff. “The Glee Club, under the direction of Mr. T. L. Herlong, S. J., will sing a few selections. The public is cordially invited to attend.”

In December 1953 the Society presented for the first time three one act plays in the Jesuit auditorium “to good audiences” (PD). Mr. Pat Koch, S. J. and Mr. M. J. Bahlinger, S. J. served as moderators. The 1953 Last Roundup mentions “regular Sunday evening meetings [which included] radio scripts, elocution pieces, dramatic readings, skits, impromptu talks, short debates, panel discussions . . . By virtue of [these activities the Society] has obtained for Jesuit recognition throughout the city for turning out fine speakers of today who will be the finest speakers of tomorrow.” In addition, the 1953 Roundup indicates that the Society presented Sunday night movies.

The February 1954 Roundup reported that for the first time, during the presentation of Hamlet, the audience would “get a chance to see the scenery changed before their eyes.” In addition, it noted that the auditorium would be rewired and have new lights installed.

On March 16, 1954, the Knights of Columbus held a “night honoring Jesuit High School” (PD). The Glee Club and the Philothespic Society entertained. In October 1954 the Society and the National Honor Society purchased a new front curtain for the auditorium.

“Because good one-act plays for an all male cast are relatively few,” the Society planned one three-act play instead of three one-acts. The Society presented Command Decision and for the first time as its annual Shakespearean play, a comedy, Taming of the Shrew. In addition the group planned “to better fulfill its aim as a speech-making society by holding private one-act plays, speeches, and dramatic and oral readings for its members only” (R Oct. 1954). Mr. M. J. Ballinger, S. J. replaced Mr. Pat Koch, S. J. as moderator.

“With the help of the Debaters, the Phil brought home the Sweepstakes Trophy” at the Catholic High School Tournament at Dallas University.”

For the first time in Jesuit’s history three organizations – the Phil, the Band, and the Glee Club – worked together to stage the Gilbert and Sullivan operetta H.M.S. Pinafore. It was presented in the 500 seat Christ the King Auditorium to standing room only crowds with approximately 1,400 over the three days. “The play netted about $650, but costs cut that to $150 profit” (1957 LR and’56-’57 R).

The April, 16, 1957 Roundup was impressed by the lighting for Much Ado About Nothing. “The most impressive piece of equipment is a huge 1000 watt spot-light. This little wonder box cost $200, but it is well worth every penny of it. This light does everything except follow the actors by itself. The colors of the beam may be changed with the flick of a little handle; and it can also produce any kind, shape, or strength of beam. . . . To complete this battery of lighting armaments, two Fresnel spot-lights have also been purchased.”

The Society again departed from Shakespeare in Fall 1957 with Arsenic and Old Lace and in Fall 1958 with The Caine Mutiny. Mutiny was performed in Christ the King auditorium with the Bishop present. However, Shakespeare continued to be staged. The moderators were Mr. Phil Hanley, S. J. and Mr. Robert Ingram, S. J.

The 1958 Roundup notes that the Speech Team is an alliance of the Debaters and the Philothespic Society. During competitions, students watched the scoring via “various high school and college bulletin boards.” The team won several grand awards that year. The 1957 – 1958 Elocution Contest was won by John Johnson (1st place) and Arthur Allen (2nd place). 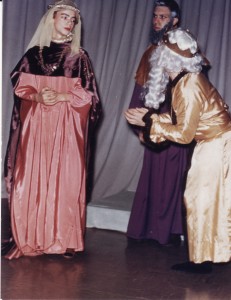 The 1958 – 1959 school year seemed to have been a particularly fruitful year if the multiple articles in each edition of The Roundup are any indication. The 1959 Last Roundup describes The Caine Mutiny as “Working in-the-round with only the barest props (tables, chairs, a curtain, uniforms), the Phil packed a ‘Standing-Room-Only’ final night audience into Christ the King auditorium. . . .[one spectator commented that] ‘It was so real, I forgot it was a play.’”

The May 1959 Roundup praised the student director Gregory George and the stage manager Jerry Hitt.

(Sources: The Principal’s and Minister’s Diaries, The Mothers’s Club Scrapbooks, programs, the student school newspaper The Roundup and the yearbook The Last Roundup)