Home History Of The Student Patrol 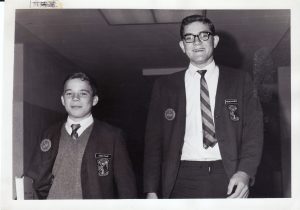 The November 1961 Roundup reported that Fr. S.J. Rivoire, S. J. had formed the Student Patrol to perform the duties of the disbanded Safety Club and more. Students from all four years may apply, but “certain qualifications are expected of the members.” In essence the Patrol will monitor the school. The Safety Club had directed student traffic, as will the Student Patrol, but the Patrol will also act as “prefects in the cafeteria and in the halls” and serve as ushers. The senior class has forty members; other classes are well represented. The captain-elect is Dan Ecklekamp. “The sincerity and the aggressive attitude of the Patrol is shown by the fact that there was a hundred-percent attendance of the seniors at the Dallas Youth Safety Council, at which our own Student Patrol won an award.

According to the October 1962 The Roundup the patrol’s “primary purpose . . . is to increase student participation in the functioning of the school by the enforcement of school discipline through student monitors. The members of the Student Patrol direct traffic, patrol the lunchroom and yard, and monitor the halls. Thus, all monitoring outside of the classroom is done entirely by students.” 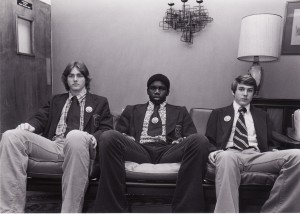 Pat MacKenna served as the head of the committee at the rank of Colonel. Two Captains, Mike Gell and Joe Mariner, served under him. “Under them are the various squads headed by leaders who are also officers. . . Senior squad leaders hold the rank of First Lieutenant, Juniors the rank of Master Sergeant.”

The Last Roundup of 1962 noted that the Patrol wore white badges on their blazers. The badges changed at some point to buttons. 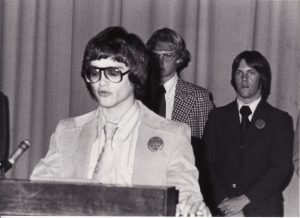 At the end of the 1962 – 1963 school year the Patrol had a “reward” picnic on May 2 at Mrs. M. E. Moore’s farm “Windridge” near Carrollton. “Although a few people managed to get themselves hopelessly lost, and some others fell in the Moore’s lake when the boat capsized, these were the only casualties.”

The 1963 – 1964 Province Prefect Report noted that it is an honor to be a member of the Student Patrol. “Their work is very efficient and their decisions are upheld by the Student Council and by the Faculty.”

The November 2, 1973, Roundup reported that the Student Patrol had undergone a demise in past years. Fr. Rivoire had hopes to revive the Patrol’s duties particularly in helping curb the tardiness and absenteeism that has occurred from modular scheduling. One problem is “that often students are unwilling to enforce some regulations. As one faculty member put it, “Some things are obviously harmful to the community and anyone would, for example, break up a fight or something of that nature. But a Patrol member is put in a position where he’s supposed to enforce rules he may not agree with.”

The paper reports that the Patrol “has become something of a closed group and complaints about inequities arose. At time it was an aggravating force which caused friction between factions with the student body.” Another faculty member pointed out “that great care be exercised in selection of members and supervision of activities.” Some students believe that seniors should show “a responsible, cooperative attitude in order to gain desired privileges. Others are disdainful as regards regulations which they view as trite. Most seem content to get away with what they can.”

By January 1974 the Patrol had been culled of members behaving badly, and according to The Roundup many “students regard them as [a] genuine disciplinary authority. . . . Randy Johnston states that “Fr. Rivoire wishes for students to take the responsibility of maintaining order.” Some of the Patrol believe in counseling over punishment. “Fr. Rivoire respects the members of the student patrol for their honesty and willingness tto invest their spare time in policing the school area.”

Tom Houle spoofed the Patrol in the March 23, 1977, Roundup, writing that after a showdown between the Student Patrol and The House of Lords, the Patrol took over the school. . . Rod Einspanier [became] the new principal taking over for Father Koch who was last seen chained to a plane headed for the coal mines of Siberia.”