Home History Of The Philothespic Society (Theater) in the 40s

Please note that the early history of the Philothespic Society, Debate and Elocution were entwined. You may wish to visit the history of Debate to grasp the full picture of this busy and important activity.

One scene from Jesuit’s first play Twelfth Night was presented on February 12, 1942, to the student body during an assembly for the Provincial and his assistant. The full play was presented on March 1 at 8:00 p. m. with Bishop Dangelmayr and other clergy in attendance. Bishop Lynch attended the following night. The students played the female roles as they continued to do for the decades that Shakespearean plays were presented.

The February 23, 1943, Roundup wrote three articles on the moderator, Mr. M. P. Kammer, S. J., who directed Twelfth Night. In fact, most of the paper was dedicated to coverage of the play. Twelfth Night was staged “much as Shakespeare would. Much of the action takes place on the floor at audience level in front of the stage. . . The settings, the work of Brother Lapeyre, Father Carroll and Mr. Kammer, have discarded realism for fancy in an attempt to underscore the comedy and the amusing romance.” 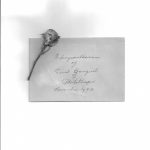 The Society held its first annual banquet on November 9, 1942, at the Cliff Towers Hotel in Oak Cliff. “Dinner consisted of fried chicken, baked potatoes, hot rolls, and string beans.” John Mohrle was elected the Society’s first president. This first banquet organized the beginning of the Society. Subsequent banquets would be held at the end of each year, during which the officers for the subsequent year were announced

Membership into the Society was decided by membership vote after the proposed member recited a short piece. “If the applicant is voted in, he will then be invited to attend the remainder of the meeting as a regular member. There is a small registration fee and a ten cent monthly dues” (R December 12, 1942).

In the 1943 – 1944 school year, the Society decided to begin a debating program in order to train students “in mastering the art of public speaking and presentation.” (For more information on the debate program, see the the History of Debate.)

In addition to plays and debates, the Philothespic Society hosted Elocution Contests and entered other oration competitions. In October 1944 The Kiwanis Club of Dallas invited Jesuit to compete with other high schools in preparing radio presentations based on the slogan, “Keep America American.” The judges selected “Jesuit, Sunset, and Woodrow Wilson as the three best and each was awarded ten dollars in war stamps.” Later at the run-off, The Kiwanis Club “could not decide between Jesuit and Woodrow Wilson, and awarded” both a twenty-five dollar war stamp.” The event was broadcast a few days later on WFAA. (R May 1944 and 1945)

In December 1945 the Phil presented “the shocking” The Spider “which was so well received that many around the school are still talking about it” (R). The moderator, Mr. Weber, left at the end of the 1945 – 1946 school year.

On September 26, 1946, the Society presented “A Pair of Hands,” a radio play written in honor of Rene Goupil, S. J. by Mr. Fred McCaffrey. On February 12, 1947, “the Society presented Macbeth at the DISD Alex W. Spence Auditorium. A rehearsal performance had been given prior to this for the nuns and the public schools” (PD). Mr. Edgar F. Shaughnessy, S. J., served as director.

In addition to performing at assemblies, staging debates, and presenting full on-stage productions, on April 19, 1946, the Society performed the one act play “The Exchange” for the Mother’s Club at the home of a Club member.

The 1946 – 1947 year began poorly. After Mr. Weber left “Many of the members lost interest. The new school year saw only thirteen members on the roll call. . . The year saw the poorest attendance at meetings, the greatest lack of knowledge of Parliamentary Law.” Fortunately, the new moderator, Mr. Edgar Shaughnessy, rallied the group. “After several months of patient work with a not too cooperative cast, financial difficulties and limitations, things suddenly began to take shape” (R June 1947). 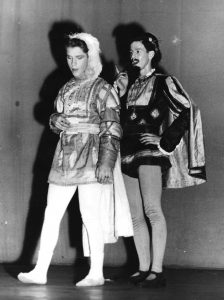 The 1948 – 1949 Last Roundup notes that membership applications “topped any previous year in the Phil’s history.” In December 1948 the Society partnered with the band to raise money for a Christmas shower for the faculty. The event, sponsored by The Mother’s Club, raised $365.

The May 1948 Roundup noted the Phil’s busy year: “Besides the debates, radio plays, Shakespearian scenes and the various speaking contests [during weekly meetings] there were the many and varied public performances.” In December the Society “put on a special radio adaption of King Lear over Radio Station WFAA. Later over the same station they broadcast the Easter Pageant ‘I Covered the Resurrection.’ This was followed by a special King Lear broadcast over Station KLIF.” The Phil also enacted one-act plays for the Mother’s Club, the Ursuline carnival, and the Holy Name Society.

The Phil’s production of King Lear was covered in the city newspapers. According to the May 1948 Roundup “The Dallas Morning News reported: ‘Approached with an appreciable degree of thought and understanding, the young cast under Mr. Edgar Shaughnessy’s sincere and able direction, did themselves justly proud and well maintained the high traditions of past dramatic productions. . . ’ The Dallas Times Herald kindly commented: ‘. . . an impressive interpretation . . . the tragedy had the full impact intended . . . The elaborate costumes, the effective scenery and the capable staging brought life and color to the Shakespearean drama.’”

In 1949 Mr. John H. Edwards, S. J. served as moderator. The January 1949 edition of The Roundup describes the various job duties and abilities of the Society officers. The president, Bill Walsh, also served as “the prefect of the Sodality, vice president of the National Honor Society, and secretary of the Altar Boys” in addition to being a member of the football team. He had the “task of presiding at all meetings, serving as chairman of the Executive Committee, and appointing committees.” The vice president, Jim O’Reilly, taught and supervised parliamentary law. The secretary, Neil O’Brien kept the minutes, the treasurer, Bob Begien, collected dues and fines, recorded attendance, and ensured that members in poor standing took no role in meetings.

The February 1949 Roundup offers this opinion on the all-male casts at this time in Jesuit’s history: “If there are any doubts in your minds as how boys can play girls’ parts, then you must see Phil Hanley, Burnell Brown, and Tommy Allen and we feel sure you will have no more doubts.” In its coverage of The Merchant of Venice the March 1949 Roundup notes that the most admired setting “was the Garden Scene of Act V, where clever lighting effects produced a moonlight scene so lovely as to bring forth a countless number of ‘Oh’s!’ and ‘Ah’s!” Mr. Cazenavette handled make-up and Mr. Browning orchestrated the music.

The Society continued its presentation of Shakespearean dramas and shorter skits, as well as Prize Debates. However, its primary purpose was to train “the students of Jesuit High School to think, to speak, and to act, so that they may be better prepared to graduate from Jesuit and become real leaders in the world—Catholic men who will serve the world in the best way they know how” (January 1949 Roundup).

1948 – 1949 was a productive year. “In addition to entertainments following the regular meetings, the Phil put on a one-act play for the Mother’s Club, a one-act play for the Dads’ Club, a radio play for the Mother’s Club Christmas Party. In December Ray Prasifka defeated “speakers from seven other Dallas schools to win the ‘I Speak for Democracy’ contest. Later, in the Gold Medal Debate, Johnny Stacer, Al Collins, Neil O’Brien, and Ray Prasifka” showcased the talents honed “discussing controversial motions at Phil meetings” (Roundup May 1949).

(Sources: The Principal’s and Minister’s Diaries, The Mothers’s Club Scrapbooks, programs, the student school newspaper The Roundup, and the yearbook The Roundup)