Home History Of Debate in the 40s

The Debate Team originally began as part of the Philothespic Society. [Philothespic is Latin for love of theater.]

The October 1940 Roundup states that the purpose of the Philothespic Society “is fostering devotion to the art of public speaking and dramatics in accordance with its motto, ‘Serve God in Joy’. . . . Another purpose of the Phil is to teach its members the fundamentals of parliamentary law.”

In the 1943 – 1944 school year, the Society decided to begin a debating program in order to train students “in mastering the art of public speaking and presentation.” The opening debate on March 30 took place at 8:00 p.m. They considered the topic “Germany Should Be De-Nationalized After the War.” Bill Triece and Jack Stanton won the negative. 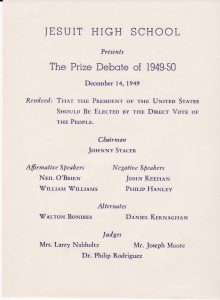 The second and third debates considered whether the U. S. should take possession of Japanese islands in the Pacific after the war. In the first, Jack Burney and Jack Nabholtz won for the affirmative. The affirmative again won in the third debate, argued by Fred Cook and Stanley Redmond.

The fourth debate argued: “America should ask Russia now of her post-war plans.” Charlie Tresp and Matt Sweeney won the negative argument. The fifth debate asked, “Should Negroes sit with white in busses and movies, eat in the same restaurants, and go to the same schools in Dallas?” Jim Scanlan and Mickey Borsch won for the affirmative.

Jack Lake and Charles Settle won the final debate, “Movies are a greater influence for evil than for good,” by arguing to affirm the good.

The first Prize Debate was presented on February 9th, 1945, at 8:00 p.m., debating the topic Resolved: That the legal voting age be reduced to 18 years. 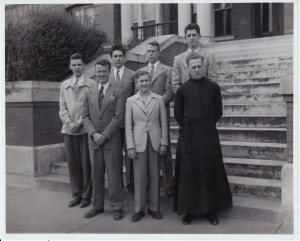 The 1946 issue was Resolved: That every able-bodied male citizen of the Unites States should have one year full time military training before the age 24.

The Roundup June 1947 reported that at the end of the 1945 – 1946 school year the Society’s beloved moderator Mr. Weber, left. His departure left the Society weakened. Membership dropped to thirteen. However, the new moderator Mr. Shaughnessy, proved more than capable, and under his leadership, the membership increased by the end of the first semester.

“The Prize debate [was revived] under the direction of the capable and hardworking Mr. Cronin,” Mr. Shaughnessy’s assistant.

The January 1947 Roundup reported that a new organization had been formed in the first of the year, The Jesuit Speech Sponsors. This organization, comprised primarily of parents of participants, funded travel to speech tournaments. They intend to increase the number of participants, from ten or fifteen to twenty-five.

The tournament on February 15 – 17 at Northwestern State held eight speaking events such as debate, poetry, and original oratory.

The June 1947 Roundup reported that Jesuit hosted its first intra-class debate tournament. The tournament was formed after a challenge by St. John’s High School of Shreveport, LA. After practicing against two local schools, the team set off for Shreveport. “The rest of the story is just as you would expect, sight-seeing tours, food, ‘bull sessions’ with the St. John’s boys on the differences in and evasions of their rules as compared with ours, for St. John’s is a Jesuit school too, more food, which, incidentally, was supplied very generously and on a large scale by Maynard Cush, whose father owns a grocery store.” Jesuit Dallas won the argument. 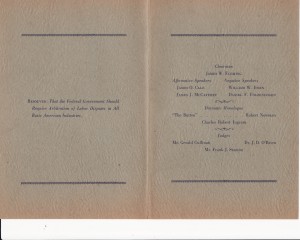 The May 1948 Roundup noted the Phil’s busy year: “Besides the debates, radio plays, Shakespearian scenes and the various speaking contests [during weekly meetings] there were the many and varied public performances.” In December the Society “put on a special radio adaption of King Lear over Radio Station WFAA. Later over the same station they broadcast the Easter Pageant ‘I Covered the Resurrection.’ This was followed by a special King Lear broadcast over Station KLIF.” They also enacted one-act plays for the Mother’s Club, the Ursuline carnival and the Holy Name Society.

Through the years the Society continued its presentation of Shakespearean dramas, shorter skits, as well as Prize Debates. However, its primary purpose was to train “the students of Jesuit High School to think, to speak, and to act, so that they may be better prepared t graduate from Jesuit and become real leaders in the world—Catholic men who will serve the world in the best way they know how” (January 1949 Roundup).

The 1948 – 1949 Last Roundup notes that membership applications “topped any previous year in the Phil’s history.” Sunday meetings helped prepare the debaters for their many contests. Ray Prasifka defeated speakers from seven other schools to win the “I Speak for Democracy” contest.

In December 1948 the Society partnered with the band to raise money for a Christmas shower for the faculty. The event, sponsored by The Mother’s Club, raised $365.

On April 21, 1949, five finalists in the Elocution Contest vied for the top spot. The contest attracted the largest number of participants to date, so many, in fact that double eliminations were necessary. The Merici High School choral club entertained as part of the program.

The Last Roundup reports that on December 14, 1948, Jesuit sponsored the most hotly contested Gold Medal Debate in history. The subject was Resolved: That the United Nations now be revised into a Federal World Government. The Negative Team, Al Collins and Neil O’Brien, won the debate.

Sources: The Principal’s and Minister’s Diaries, The Mothers’ Club Scrapbooks, the school yearbook The Last Roundup, the student school newspaper The Roundup