Home History Of Debate in the 60s 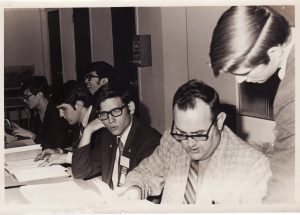 On December 11 and 12, 1959, the debate team of Eddie Carriere and Harry Salis won a second place trophy at the North Texas College speech tournament in Denton. “This was quite an honor for the prize debate team who gained victory in competition with ninety-five other debate teams. Since September the speech team has won nine speech trophies and plaques and thirty-six individual awards: (Christmas 1959 The Roundup).

The Gold Medal Debate in February 1960 packed the Christ the King Auditorium and began with a musical “introduction by the L. G. C. Choristers. Immediately following
L. G. C.’s program, Hal Womack, one of our best sophomore debaters, acted as emcee, introducing the discussion” (R Feb. 1960).

On March 19, 1960, the freshman team won first and second honors in debate and second in duet acting and sweepstakes at the Ursuline tournament. 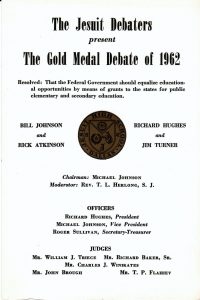 In November 1960 the Speech Team was launched and “participated in two major tournaments . . . one at the University of Dallas and a second at Sherman. . . Jesuit swept the tournament. . . Tom Pauken, the veteran senior, captured a first place in extemporaneous speaking. . . . The Jesuit Debaters also accumulated trophies, for five of our teams made the elimination rounds: (R Nov. 1960). In a later tournament sponsored by Jesuit and L. G. C., Jesuit totaled “more points than any other participating school. . . thereby winning the first place sweepstakes trophy” (R Dec. 1960).

On March 6 and 7, 1961, the debaters Brady Lotridge and Tom Pauken won the first place trophy at the speech tournament held at Garland High School. At the same tournament Jesuit placed second in original oratory and extemporaneous speaking. In addition, the freshman team headed the list of winners. Mr. O’Reilly, S. J. and
Fr. Weber, S. J. coached the freshmen.

The 1961 Last Roundup summed up the increasingly successful debate team: “A quick visit to the trophy case in the main corridor can say more for the Jesuit Debaters and the Speech Team than any paragraph of writing. In the past six years the team won seventy-one speech trophies and plaques. Since the last annual went to press, the team has won six sweepstakes, and over sixty individual event awards. Sweepstakes were won at tournaments held at Dallas University, Hillcrest High School, Bryan Adams High School, the sophomore and freshman speech meets, and last year’s National Forensic League district tournament.” 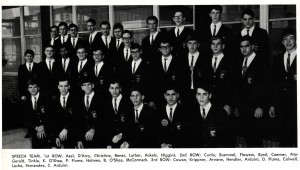 The November 1961 Roundup proclaimed: “The speech team is esteemed as one of the most powerful in the entire North Texas district. Fr. Jacques L. Weber, S. J., who guided the team through the many years of building its fine reputation, had now gone to Houston; but, under the direction of the new moderator, Father T. L. Herlong, S. J., the team does not intend to let this reputation dwindle.”

The December 1962 Roundup notes that “recognition of the speech team’s actions throughout the year is usually given in chapel, when we are told to ‘say a Memorare for the success of the speech team.” The prayers must have worked as the team continued its winning streak. Despite not being able to enter the girls’ divisions (half of the sweepstakes points), Jesuit again earned the top spot in the League’s North Texas District which then led to an invitation to the National High School Invitational Cherry Blossom Debate Tournament in Washington, D. C. Their participation may have led to their mention in the March 2, 1963, Congressional Record, noted below.

In 1963 the Roundup and The Last Roundup consistently began reporting on debate in separate columns, as distinct from Philothespic.

The April 1963 Roundup reports on the March 27 Gold Medal Debate. In this event “the four best debaters square off against each other at the end of the speech season.” Jim Turner won in the affirmative on the question, Resolved: that the United States should promote a common market for the Western Hemisphere. In addition, the judges chose Turner as the best speaker. While the judges contemplated their decision, “Bob Leicht delivered his prizewinning selection from Huckleberry Finn.”

“In a message to the House of Representatives, which is now recorded in the Congressional Record, the Hon. Bruce Alger, Representative from Texas, stated that “This achievement by a team representing one of our fine Dallas high schools is another of the fine record of Dallas County (The Roundup 1963). 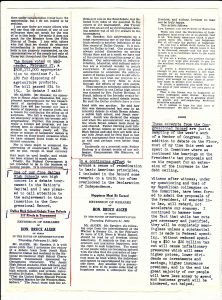 “The Speech Team is the only organization at Jesuit which competes consistently and successfully with public schools. . . . The Speech team is comprised of the Debaters, who handle debating and forensic individual events, and members of the Phil who participate in interpretive events” (The Roundup November 1963). The team travels around the country amassing victories. In the Bellaire (Houston area) tournament, Pat Coerver and Tom Hylden brought home a 3-1 win-loss record. Jesuit competes against larger public schools who have daily speech classes while Jesuit has none.

The team also participates in extemporaneous speaking and Bible reading.

The summer of July 1964 brought tremendous success to the Debate team. “Joseph Brophy and Glen Scammel swept first place in debating at the annual forensic institute held by the University of Denver. Irwin Sentilles, attending the five-week institute at Northwestern University, was cited for outstanding achievement, including a win in the extemp contest held there. Ohio saw another Ranger, Mike McKool (the sophomore ‘Mrs. Suavy’) claim first in extemporaneous speaking at Ohio State.

On December 31, 1964, The Dallas Times Herald covered the conflict between the Dallas Independent School System and the local Catholic schools. “Dallas School Board President Robert S. Folsom said Thursday that administrators were trying to be fair to Dallas Negro schools by asking integrated Catholic schools to not use Negroes in debates with Dallas public schools. Three integrated Catholic high schools [Jesuit, Ursuline, and Nolan] said they turned down invitations to a Dallas public high school speech tournament last month when one of the schools [Jesuit] was asked not to use a Negro member on its debate team.”

After a public outcry DISD backed down somewhat, saying the district had no policy, but that each school principal could make his own decision. In January Jesuit hosted approximately 630 schools in a tournament to which “all Dallas area schools with speech programs and selected schools from all over Texas, Louisiana, and
Oklahoma. . . . Supt. White . . . . [explained that the district was trying] to live within the framework and spirit of our plan for desegregation.” 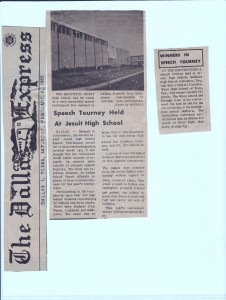 Despite this controversy the tournament was a tremendous success as reported by The Dallas Express on February 6, 1965: The event was so large that it was necessary to use not only Jesuit High School but Ursaline [sic] Academy and St. Rita School as well. A group of over 500 judges donated their time and efforts in this gigantic tournament. The judges were selected from the entire Dallas community without regard to race, creed or color. This event proved to Dallas that teenagers, properly trained and guided, can indeed do more than dance to rock and roll and carry out acts of violence.”

In the 1965 – 1966 school year Dave Crippler was ranked fourth in the National Forensic League, others performed well in Humorous Interpretation, Dramatic Interpretation, and Duet Acting. That these students did not place first, the May 1966 Roundup whimsically surmises that it may have been due to the incompetence of the judges.

In Jesuit’s Junior/ Senior Elocution contests Joe Coerver won first place for his dramatic delivery of a piece from Becket.

The 10th Annual Gold Medal Debate was presented on April 26, 1966. The team of Tony Iwanski and Mike McKool won for the negative. McCoy also won the Best Speaker honor.

The 1966 Last Roundup notes that “Mike McKool merited the title of ‘fourth best speaker’ in the National Cherry Blossom Tournament. And . . . Mrs. Bruno Jacob, co-founder of the National Forensic League, presented the school with its award for continued excellence in speech, one of 25 given annually.”

In Jesuit’s Fourth Annual Invitational Speech Tournament, the speech team did not participate so they could devote their attention to administrating the tournament. The tournament was broadcast over closed-circuit television station, W-JHS and included “interviews with the coaches and participants, and detailed accounts of the different events” (R Jan. 1967).

The May 1967 Roundup notes: “The most outstanding accomplishment on an individual basis was delivered by Mike McKool, whose NFL point total makes him the fifth best speaker in the nation and the most outstanding speaker in the speech team’s history. And another record is set through the joint efforts of McKool, [Jeff] FitzGerald, [president of the Jesuit chapter of the National Forensic League] [the speech team president] [Ken] Asel, [Henry] Ackels, and [Joe] Coerver, whose outstanding achievements make this season the first to boast of five recipients of the Double Ruby—the highest award the NFL can offer.” 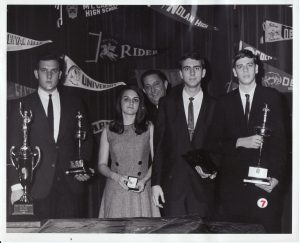 The 1967 – 1968 year brought a first place win in debate and dramatics at the North Texas N. F. L. District Tournament in Arlington. “The team of Larry Ackels and Mike Fernandez went seven rounds, losing only one, and earned the right to go to the National N. F. L. Tournament in St. Paul, MN. Dan Maher was the first person in Jesuit’s history to have ever won first place in dramatics” (The Roundup May 1968). On April 27 Jesuit hosted its first junior high tournament.

The Gold Medal Debate was held on May 7. “Jesuit’s two top cross-ex teams, John Baugh-Joe Coerver, and Larry Ackels-Mike Fernandez debated this year’s resolution: Resolved: “That Congress should establish uniform criminal investigation procedures” (The Roundup May 1968). The Ackels/Fernandez team won with the affirmative.

The 1968 Last Roundup sums up the year: “’67-’68 was easily the most successful season of the Speech Team’s history. Certain highlights were: winning Sweepstakes at both Centenary College and Richardson, finishing ninth out of 180 schools at the National Cherry Blossom Tournament in Washington, D. C., and our first place finishes in both Debate (Mike Fernandez and Larry Ackels) and Dramatic Interp. (Dan Maher) which entitle these winners to go to the National Tournament in St. Paul, Minnesota.”

Sources: The Principal’s and Minister’s Diaries, The Mothers’s Club Scrapbooks, and the student school newspaper, The Roundup, and the yearbook, The Last Roundup.