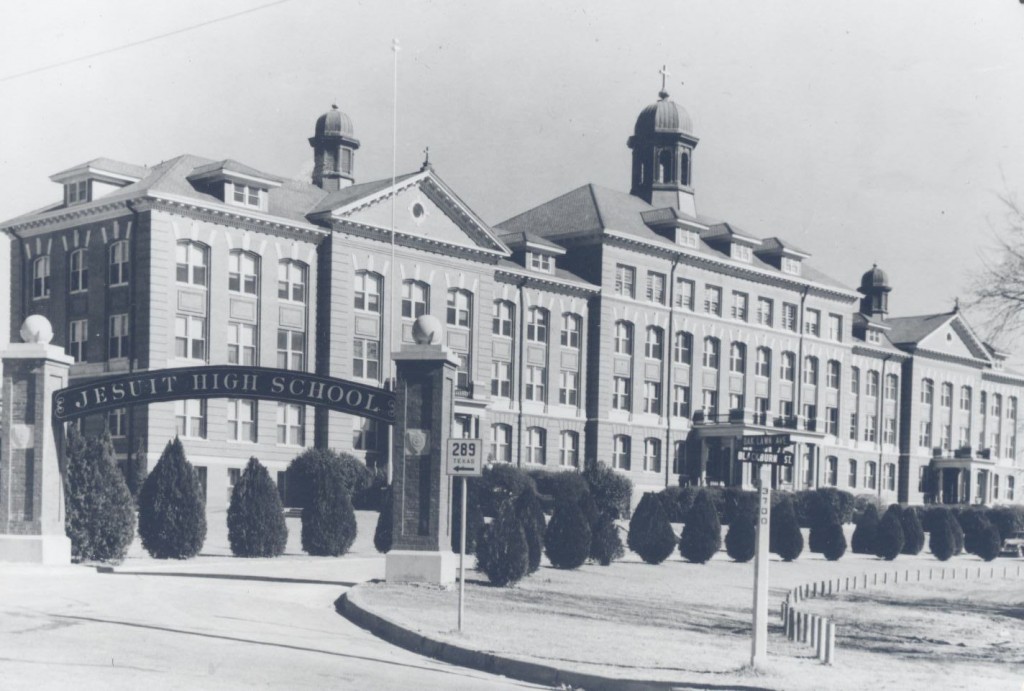 A bit more than 40 years ago…It was a hot summer day…& it was Wednesday, Aug. 6…and the year was 1952. I came to Jesuit High School Dallas on that day. There I found that stately and rambling red brick building with its broad entrance drive…and I can still see that memorable archway spanning that drive…There at the juncture of Oaklawn Ave and Blackburn. Just across the way from Holy Trinity Church…Jesuit High School embellished in letters above that arch.

Oh, this I remember…There before me was that seemingly vast expanse of red brick…like all Gaul…divided into three parts. The largest middle section was crowned by its stately cupola and two smaller wings, one on the east, the other to the west, each with its own smaller cupola. Perched on a small elevation, perhaps a hill, the main section was approached by a flight of concrete steps leading up to the front porch and door commonly referred to as “The Senior Steps and Entrance”…and each wing had its replica of porch & steps. And here I stood fresh from ordination…on that memorable August afternoon. I gazed up to that vast expanse of red brick where I was to spend the next ten years of my Jesuit life here.

All in all, the edifice consisted of a large basement and four floors or stories. The basement of the main section contained the cafeteria, the space for athletics, and a wide open space, simply called the basement, where the students gathered on the cold rainy days. There was also a small alcove across from the cafeteria known as the “Senior Lounge.” The administration offices were on the first floor–the principal’s office, and the place where Mrs. Carline Norsch–the “Lady of the School”–was registrar, receptionist, and what not. There were also classrooms. The library and other classrooms filled the first floor east wing. There were more classrooms on the second floor reached by a large main staircase just across the hall from the front entrance. The second story east wing held the auditorium with its stage and folding chairs. There were more classrooms above on the third floor and the student chapel was right over the auditorium.

At the top of it all on the 4th floor, with no fire escape, was the gymnasium. In after school hours the sounds of the bouncing basketball and the stomp of “The Bunny Hop” at the student dances echoed throughout the vast building when that gym was in use. I can still hear the deep voice of Dan O’Shea calling the square dances. The west wing was the Jesuit Faculty Residence. There were the bedrooms, dining area, kitchen, living quarters of the Jesuits.

Having been the so-called moderator of the band as a scholastic at Jesuit High School New Orleans, I was interested in the band, and it wasn’t long before I made known my interest to the principal, Fr. Ed Curry. I became the moderator and Mr. E.L. Hohman was the director. Mr. Hohman came with the school. He had been the music director at St. Joseph’s High School and transferred to Jesuit when it opened. The band room facilities in part of the old boiler room were inadequate, so it wasn’t too long before we moved the band room way up on the fourth floor, adjacent to the gym, over the east wing. The rector/pres Fr. Jack Sweeney with Fr. Able, the minister, and a couple of helpers built the new band room from scratch. The space used was a floored, un-partitioned attic space in the east wing over the chapel. When we finished there were uniform closets, shelves for the instruments, a telephone, and most amazing of all, two ceiling fans. What a luxury! Getting new uniforms was next on the list. With the help of a wonderful man–a benefactor, Mr. Arthur Hughes–beautiful new uniforms were gotten. From 1953 until 1961 I remained band moderator. I frilled [sic[ band even though in the interval I had become asst/principal of discipline. Our wonderful principal, Fr. Mike Kammer, gave in and allowed me to moderate the band, teach, and be asst/prin..

Mr. Elwood Hecker, SJ who came with the school in ’42 was the first band moderator/glee club director; working closely with Mr. Hohman they together produced the fight song: “We’ll sing hurrah for the blue and gold” and the Ranger Victory March (First Alma Mater). I have no memory of this alma mate; by my time it had disappeared, so Mr. T.L. Herlong–now Fr. Herlong–at my invitation came forth with a new Alma Mater whose closing words are: “To serve our fellow man with love, our country and our God, with faith & courage all our lives, in the path that Jesus trod.” Until ’72 this was our Alma Mater when the present “Freedom & brotherhood” replaced it…”

Yes, happy memories abound…the seniors in their little private shed where they were allowed to SMOKE and LEGALLY! The wonderful Shakespearean dramas inaugurated by Mr. Mike Kammer, later principal…halls and classrooms are filled with the voices and laughter of our early principals Frs. Mulhern, Ross Durhan, Ed Curry. The special voice of Fr. Tom Shields & the sounds of Fr. Bob Tynan, long-time counselor and finally rector/president. I can hear the sounds on the handball courts and hear the team practice on the lower field adjacent to Turtle Creek.

Here on the Oak Lawn – Blackburn campus the acorn was planted, and here the mighty oak continued to grow for twenty years…then over to the new Jesuit on Inwood Rd. On this fall day, the 17th day of Oct. in the year 1992, after fifty years of providing a place for students in Dallas to learn and grow and become Men For Others, the Jesuit community–the Fathers, the facility, Lay & Religious–together with the wonderful men to celebrate its accomplishment & to plan for the future. At this moment more than five thousand men are privileged to be numbered among the Jesuit Dallas Alumni.

This is the reason for Jesuit. This is Jesuit’s contribution to Dallas. And to our nation, to our world. And for many more years may we hear those words of Fr. Elwood Hecker’s ”Jesuit Fight Song”: “We’ll raise a mighty shout and sing hurrah for the blue and gold”… 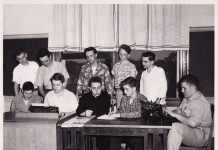 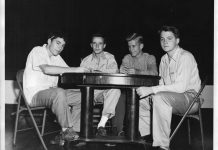 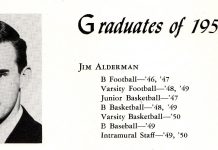